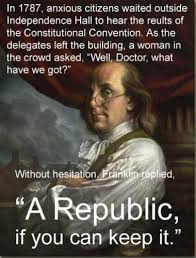 There is a story, often told, that upon exiting the Constitutional Convention Benjamin Franklin was approached by a group of citizens asking what sort of government the delegates had created. His answer was: “A republic, if you can keep it.” The brevity of that response should not cause us to under-value its essential meaning: democratic republics are not merely founded upon the consent of the people, they are also absolutely dependent upon the active and informed involvement of the people for their continued good health.  (source: Richard R. Berman, PhD, “Perspectives on the constitution)

Are the citizens of Defiance “active and informed” (and involved) enough to “keep” our Democratic Republic?